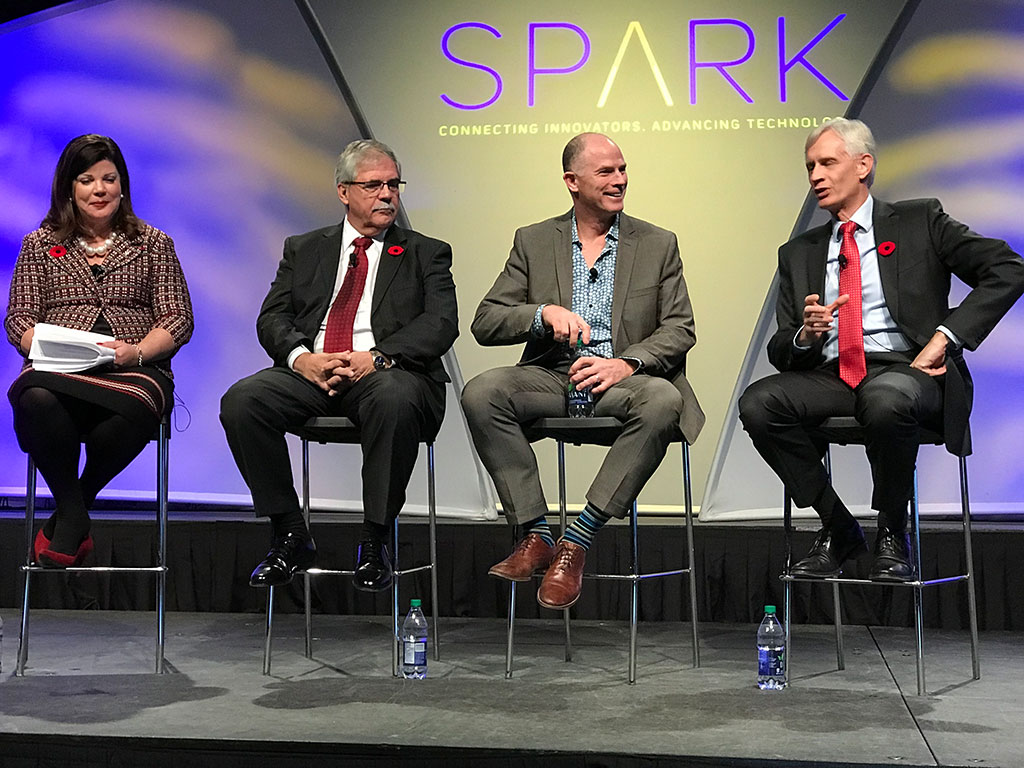 More than 560 innovation and business leaders converged in Edmonton last week to attend SPARK 2017. The conference, featuring more than 80 speakers, was co-hosted by Emissions Reduction Alberta and Alberta Innovates. It brought cleantech researchers and innovators together with representatives from the business community, government and the innovation system.

“Our province’s doors are open to ideas and investment,” said Premier Rachel Notley, who reminded attendees that Alberta’s goal is to generate 30 per cent of its power needs from renewable sources by 2030, representing about 5,000 megawatts of green power.

“If SPARK 2017 results in a more successful journey along the continuum from idea to product, and product to company, and we get both strong environmental and economic outcomes, that’s the home run,” said Steve MacDonald.

“What I hope as an outcome from SPARK 2017 is what I call positive collisions,” said Laura Kilcrease. “Out of that networking environment and the knowledge within the network, there will be positive collisions that will spark new activities and new outcomes.”

Keynote speaker Thomas Homer-Dixon of the University of Waterloo said Alberta needs to take the expertise the province has built up over decades and “start selling more know-how to the world and less material stuff.”

Closing the first full day of the event was a session on ‘What the Marketplace Wants,’ moderated by ERA Board Chair Kathy Sendall. The panel offered insights from President and CEO of Capital Power Brian Vaasjo, Chief Executive of COSIA Dan Wicklum, and Shell Canada President and Country Chair Michael Crothers.

“Our tax bill for carbon is the largest cost we have,” said Vaasjo. “But it drives action and activity to reduce carbon… and produce carbon savings so it is an enabler of development.”

The second day of the conference featured opening remarks from Minister Phillips.

“At its core, the Climate Leadership Plan is about setting the province on a new path – and charting the way towards a better future. An innovative future that leverages Alberta’s strengths in technology and engineering,” said Minister Phillips. “By taking action on climate change, by supporting the growth of green jobs, and by investing in clean tech innovation, we’re building a better future for both today’s Albertans and tomorrow’s.”

“We have a number of innovations where we are world leaders,” said Céline Bak. “Already I see other countries coming here to see what we are doing, we should stand up and take credit for that and we should take payment for that.”

ERA plans to host the next SPARK event in 2019.

Some presentations from SPARK 2017 will be available online next week. See: http://spark2017.ca/.